Please join your neighbors two to three times a year for work parties at our own Shorewood Park.  Watch for signs that go up a week before the work party or check the events section of this website.

The park entrance is on 28th Ave. NW just down the street from Shorewood Elementary School. We meet at 10:00 AM and work until Noon.

The main work is to remove invasive plants such as English Ivy, English Holly and Himalayan Blackberry.

Removing Ivy frees up growing space for native plants which are so very important as hosts to insects that nourish young salmon. After young salmon migrate to Puget Sound they spend 6 months near the shore feeding on tiny fish and terrestrial insects. Northwest native insects do not eat Ivy (note all of those shiny green leaves with no holes).

Gloves and tools will be provided, but feel free to bring your own favorites.

Please email Jean Spohn, jeanspohn@centurylink.net if you have questions or would like to help. 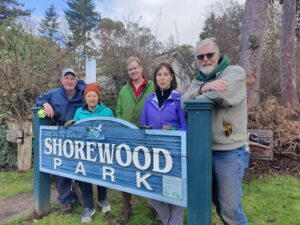 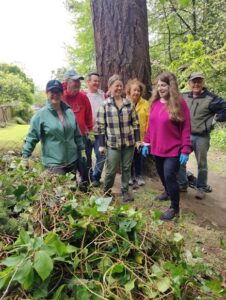 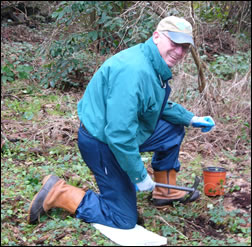 Shorewood Park Work Party History: In January 2009 11 folks participated. Some pulled ivy from an area graced by two Noble Fir trees planted by Fred Henzi 20 years ago, and others planted Coastal Strawberry plants which are a wonderful native groundcover. In February, volunteers placed 25 Sword Ferns along our trail and then removed many small English Holly trees and lots of English Ivy. In March 7 of us whacked back the big stand of Himalayan Blackberry at the lower entrance. In April lots of Ivy was pulled from around the intersection of trails near the steps. For the summer work parties mulch was placed around new plants and folks started peeling back the Ivy wasteland on the hill that borders 26th Place.

Why is English Holly a problem?

You might wonder – Why is English ivy a problem? English ivy is a woody, climbing vine that has been used extensively in the Pacific Northwest. Ivy used to be found in roadside plantings, on steep banks, as ornamental decoration and climbing on buildings, fences and other vertical surfaces. But English ivy is not native to the United States and has no natural predators or pests to keep it in check. It easily escapes from planting areas and invades natural areas, parks and urban forests. It creates “Ivy Deserts” – areas so dominated by ivy that no other vegetation survives. Ivy affects trees negatively, especially when it climbs into the canopy. By adding weight to limbs and reducing air flow around the tree’s trunk, ivy makes a tree more susceptible to canopy failure, wind stress and disease. It can also strangle trees around their base and reduce the flow of nutrients up and down the tree.

English ivy does not provide a significant food for native wildlife, but does provide habitat for rats. And banks covered with ivy are prone to landslide.

What can you do? Do not plant ivy. Remove ivy, especially from vertical surfaces where it seeds and is spread further by birds. Remove ivy from your yard. Participate in a Shorewood Park work party.

The first Shorewood Park Work Party of 2008 happened on February 16th, a lovely Saturday morning. Seven volunteers pulled Ivy from a side path that leads towards the school near the upper entrance to Shorewood Park. Areas close to the park boundary have the heaviest Ivy mats of infestation and so huge mounds of Ivy were built. These Ivy mounds will be left to rot and turn into soil. We found native Salal, Vine Maple and Oregon Grape struggling to survive underneath and so gave them a much better chance of survival.